Due to the public holiday Ascension Day, 26 May 2022, the DENIC head office in Frankfurt is closed. Of course, the 24/7 service will be on duty and can be reached in case of an emergency.

On Friday, 27 May 2022, we are available again during regular business hours.

DENIC eG – the operator of the German country code .de on the Internet – is turning 25!

Anybody who surfs the Internet in Germany – to visit a website, to write an e-mail or a blog, to browse an online shop, to book a ticket for a train or concert, to do digital banking, to stream a film or music, to keep fit with a virtual sports course during the lockdown, or to confer with colleagues working from home via video call – very frequently, although mostly without knowing, makes use of the services of DENIC eG (Deutsches Network Information Center). This is the case, whenever a .de stands behind the web offer.

On 17 December 2021, DENIC turns 25 and the "makers behind .de" are looking back at the foundation of the Cooperative, which was established at that date by the then 37 German Internet service providers as a not-for-profit, independent service providing company. It all started with a university project in the very early days of the online world. From this emerged a group of today nearly 300 companies united in a cooperative and about 100 highly qualified employees who together ensure the smooth and reliable functioning of all Internet applications with the German country code .de. 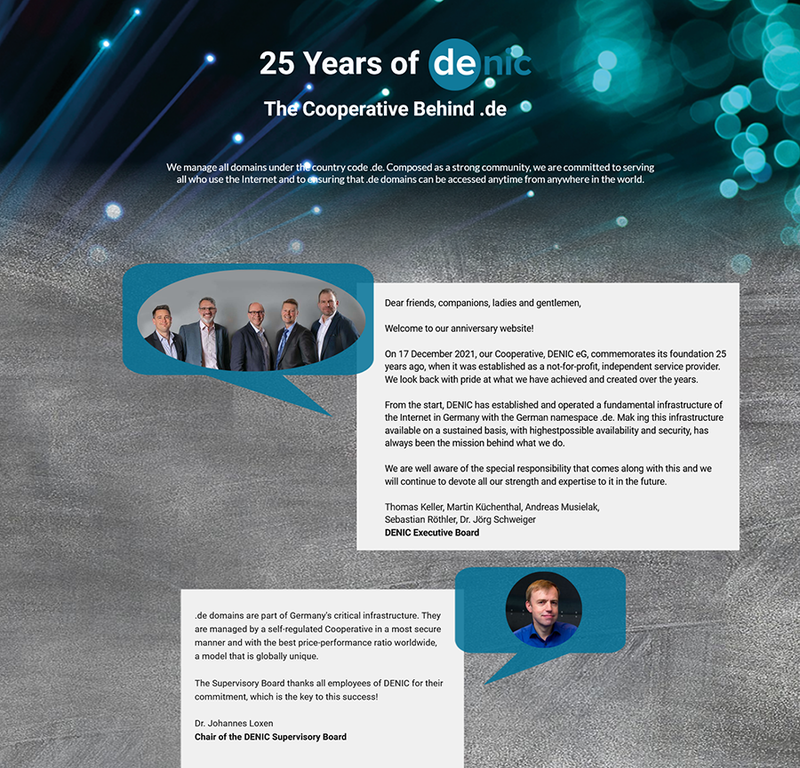 DENIC is the central registry for all domains under the Internet ending .de. Organised as a private not-for profit cooperative, it has administered and operated the German namespace and thus a basic infrastructure of the Internet in Germany for 25 years. No website with the ending .de could be accessed on the Internet, no web-based services, such as e-mail, online shops, electronic ticket systems, streaming services or social media platforms with a .de address would be available to Internet users, if the DENIC systems would not function securely and reliably 24 hours a day. That this works long-term, quick and easy – within a fraction of a second and on average seven billion times a day – is due to the more than 100 employees at the DENIC head office in Frankfurt.

High-Performance Infrastructures: The Backbone of Digital Progress and Modern Networking

The technical systems behind .de are part of Germany's critical infrastructures (KRITIS). Running these systems, DENIC is rated as one of the organisations that are of particular importance for public utility and safety in Germany.

Not least due to challenges like the global Covid-19 crisis, the Internet as the very resource of the future for social participation and a successful digital transformation of the business location Germany, has further gained in importance, and so has the work of DENIC.

Knowledge platforms such as www.zusammengegencorona.de of the Federal Ministry of Health or the website of the Robert Koch Institute www.rki.de were and still are the contact points for the population when they seek pandemic-focused information. The Covid help portal www.ueberbrueckungshilfe-unternehmen.de of the Federal Government enables companies, self-employed persons and freelancers whose existence is at risk as a result of the pandemic to submit applications for support in an uncomplicated way. Action and initiative hubs such as www.helfer-shuttle.de or www.flutwein.de, which were set up spontaneously in the wake of the flood disaster that occurred in parts of Germany this summer to centrally coordinate voluntary helpers and financial support for those affected on site, impressively show how, thanks to the "swarm format" of the Internet, meaningful projects that promote social cohesion can be realised quickly and with a wide reach. Such coordinated action would simply not be possible by other means. And charitable activities like the German Internet café for elderly people “Senioren für Senioren” www.i4s.de, which was recently honoured by the Federal Ministry of the Interior on the international Volunteer Day, show how the Internet can always open up new social spaces of experience also in the realms of education and culture – regardless of the time, space and age of the people whose lives are enriched by it.

67 million people and thus 94 percent of the German-speaking population above 14 are online today. The Internet has become an integral component of their private and professional life. According to the public broadcasters ARD/ZDF-Onlinestudie 2021

76 percent of them use the Internet on average about 4 hours a day – to obtain information, as a communication and working tool, for shopping or entertainment. That people spent more time in the digital space under Covid-19 conditions, is also reflected in the rise of annual average DNS queries to the DENIC name servers, the navigation system of the German Internet.

The Digital Index study 2020/2021 of the D21 initiative Digital-Index 2020/2021 of the D21 Initiative found that 32 percent of the working population in Germany worked from home or used teleworking or mobile working options in 2020, at least part time (34 percent of these for the first time since the start of the Covid-19 crisis). Among those doing office work, this share amounted to even 59 percent, which is an increase by 29 percent on the previous year. According to the 2020/2021 German National Report of the Global Entrepreneurship Monitor (GEM), commissioned by the Federal Ministry for Economic Affairs, 25 percent of all start-ups in Germany in 2020 were initiated by opportunities that had emerged only as a result of the Covid-19 crisis. The German e-commerce association, Bundesverband E-Commerce und Versandhandel Deutschland e.V. (bevh), described the third quarter of 2021 as the strongest in terms of sales in the last five years and gave an optimistic forecast for the German online trade to exceed the 100 billion Euro mark in overall sales for the first time ever this year. The largest growth drivers are the multichannel retailers, with many enterprises among them that used to be purely stationary but built up a digital foothold during the pandemic under high pressure

The trend of boosted Internet use is also reflected in the strong increase in the domestic demand for .de domains, which in 2020 alone resulted in tripling the number of new registrations on the previous year and the largest percentage growth since 2012. The pronounced growth trend remains unabated in the ongoing year and DENIC is thus assuming ever more importance as a key pillar of the Internet in Germany. 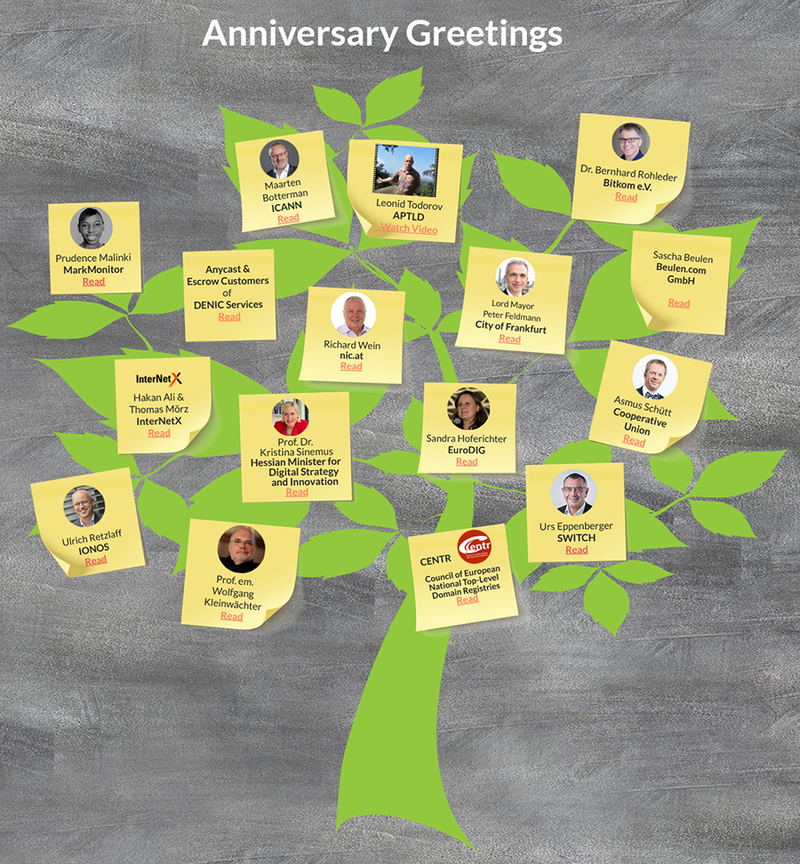 Excellent Brand Image and Top 3 Registry of the World

In the meantime, the business model of self-governed domain administration with independent operation of the related technical infrastructure has long proven successful in Germany. After now 25 years of administering and providing technical support for .de domains, DENIC is considered the epitome of competence, reliability and integrity. Testimony of the trust DENIC enjoys among companions from the Internet industry, but also among German policymakers, are the greetings on DENIC’s special anniversary webpagehttps://www.25-jahre-denic.de/grussworte/.

Today, about 300 companies of all sizes and from all sectors of the IT and telecommunications industry in Germany and abroad are members to the DENIC Cooperative. They all live the idea of this impartial, not-for-profit organisational form, which relies on participation and consensus building – and with its broad basis of market participants mirroring the democratic idea of the medium Internet is globally unique among the domain registries.

Due to the concerted effort and commitment of the DENIC member companies and the DENIC staff, .de has developed into one of the most successful domain endings worldwide within 25 years, both with regard to sustained stability and resilience and with regard to registration numbers. With by now more than 17 million domains under management, .de has long been one of the international top 3, together with .com and the Chinese domain ending .cn, of the today more than 1,900 domain endings. And DENIC thus has been one of the leading domain registries in the world.

In the 25 years of its existence, DENIC eG has also repeatedly played a pioneering role in the further development of registry services and set technical standards: from the early introduction of an electronic registry system to the in-house operation of high-performance, geo-redundant mirror data centers, from the scalable name server network distributed over five continents at the most important Internet hubs in the world, dimensioned for several million user queries per second, to the implementation of the highest standards in information security and business continuity management. The virtual journey through time on DENIC’s special anniversary webpage takes you on a quick tour through the DENIC history with its major milestones and achievements. 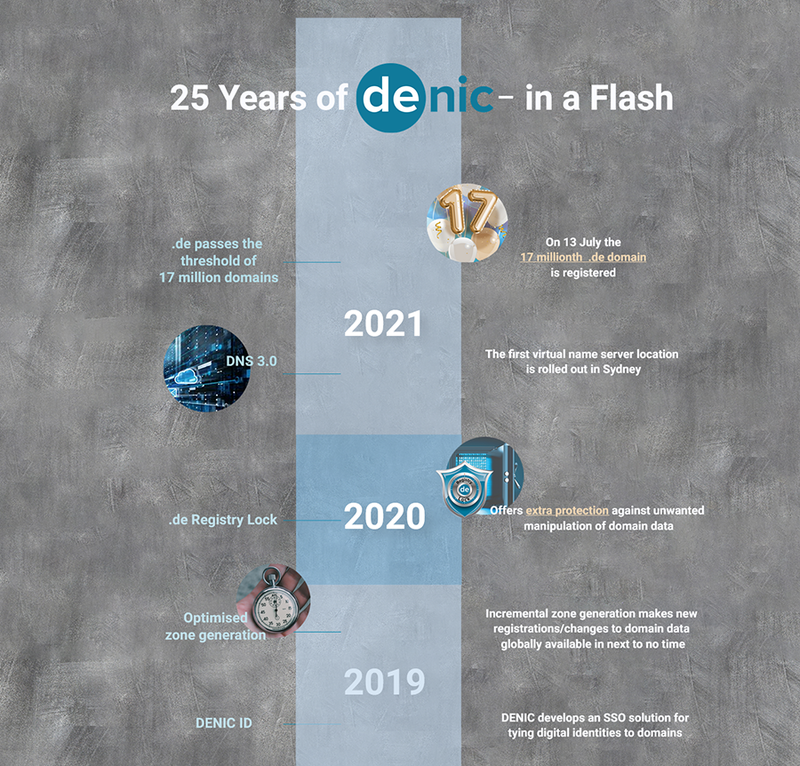 As a cooperative characterised by community spirit and committed to democratic values, DENIC is also actively involved – beyond the realm of its core tasks – in various multistakeholder processes at national and international level where different interest groups meet to deal with critical and complex themes around the Internet. Through its participation in national and international coordination and standardisation bodies like ICANN, RIPE or IETF, DENIC contributes to the preservation and further development of the Internet as an open, free and secure medium. In the context of Internet governance, DENIC partners with governments, the private sector, academia and civil society to develop and apply common principles, rules and programs for the Internet’s future use. As a longstanding sponsor, the Cooperative also fosters a wide variety of next generation education initiatives, from the IT youth hackathon "Jugend hackt" up to the European Summer School on Internet Governance (EuroSSIG).

A study conducted in 2020 by Germany's digital association Bitkom concludes that digital technologies have the potential to render a 50-percent contribution to Germany reaching its climate goals by 2030. On the occasion of its twin jubilee in 2021, the organisation behind .de participates in a special way to reaching this aim. Celebrating 35 years of .de and 25 years of DENIC eG, the Cooperative supplements what it already contributes with its daily work with a symbolic action: In cooperation with the initiative Planet Tree the "DENIC Forest" is being created in a woodland in central Germany, near DENIC’s offices. More than 1,000 robust oaks will be planted there, symbolizing how deeply rooted DENIC is in the German and international Internet community, and making DENIC members and employees tree sponsors for a piece of sustainable future in the real world.