In 2021, with the trend towards digitisation continuing, the number of domains registered under the German country code .de grew to exceed 17 million worldwide. Every year, the precise geographic distribution of .de domains is mapped in the annual regional domain statistics published by DENIC. The registry managing all domains with the ending .de now presents the results of 2021.

Domain development was very positive again in 2021: All in all, the .de domains under management increased by 460,000, the number of.de domains registered in German cities and districts grew by about 218,000. The west-east divide in the distribution of .de domains across Germany remained nearly unchanged. 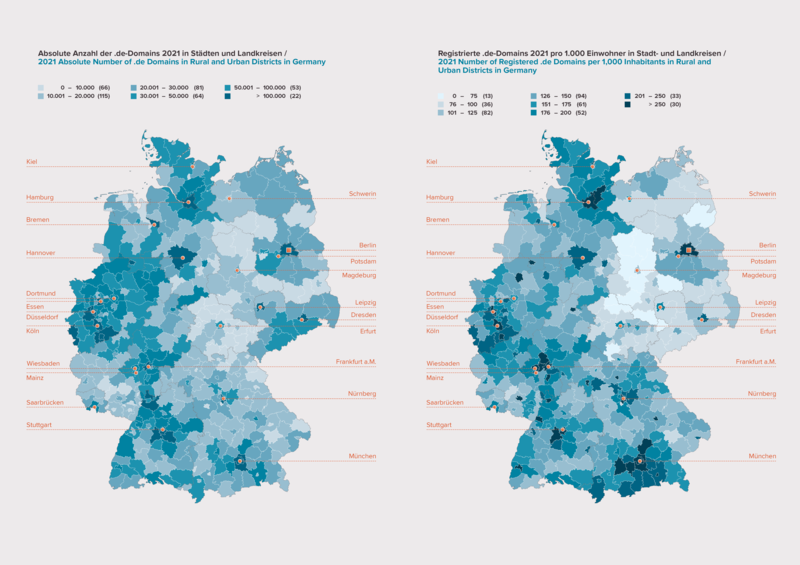 Municipal Level: Growth of .de Domain Numbers in German Districts Stronger than in the Cities

Looking at absolute domain numbers, the top places were held by the same large cities with the same ranking as in the preceding years. Scoring 1,005,052 .de domains, Berlin was clearly above the one-million mark and far ahead of Munich (620,887) and Hamburg (599,586) on ranks two and three. Also when referring the number of .de domains to the number of inhabitants, the top ranking has remained the same: Osnabruck comes first again: With 1,572 .de domains per 1,000 inhabitants, it still is far ahead of the other two top runners in the city league, Munich (418) and Bonn (374). In regard to the districts, the frontrunners were located in the south of Germany again, namely Bavaria: With 508 .de domains per 1,000 inhabitants, Starnberg maintained its leading position, Freising (419) and the district of Munich (371) followed at a distance. The national average was 185 .de domains per 1,000 inhabitants (higher individual statistical values reflect local domain investors with larger-scale domain portfolios). About one quarter of the cities and districts included in the analysis exceeded the reference value, whereby the number of cities (51) with above-average values was higher than the respective number of districts (42). Measured in absolute numbers, domain growth was considerably more pronounced again in the 291 districts (+137,000) than in the 110 cities (+81,000). 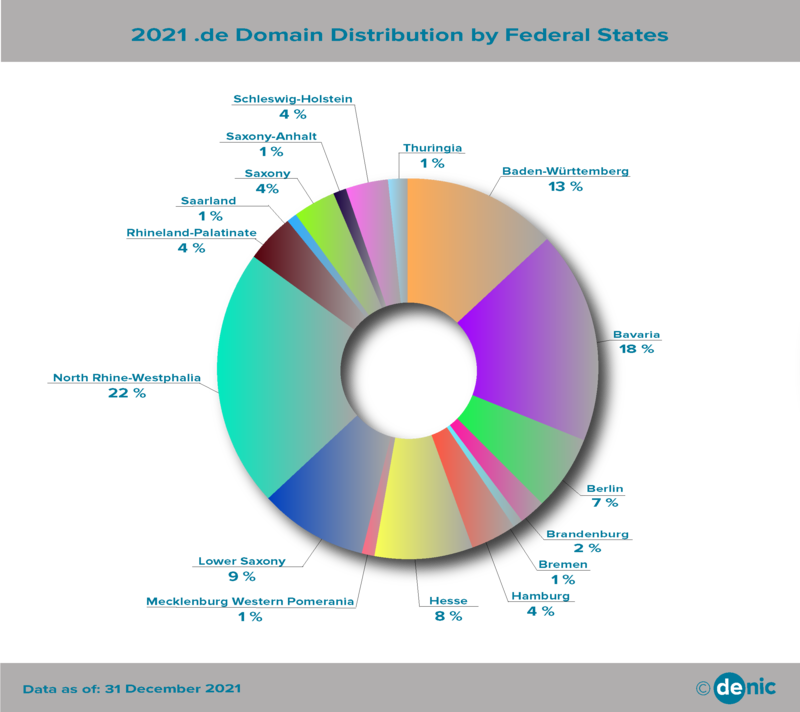 Regional Level: Percentage Growth in the East of Germany Slightly Exceeds Increase in the West

The ranking on the federal-state level for the number of domains related to inhabitants also was consistent in 2021. The state of Hamburg – comprising the city of Hamburg and its wider out-skirts – with 325 domains per 1,000 inhabitants maintained its uncontested leading position and stayed far ahead of Berlin (274) and the state of Bavaria with its vast lands (209). The state of Saxony-Anhalt (85) once again brought up the rear behind the states of Thuringia (107) and Mecklenburg-Vorpommern (109). With a plus of 1.4 percent on the previous year (+1.7%), the overall national growth rate related to the number of domains remained at a high level. Looking at the complete German territory, a total of eleven federal states scored values above the mean value, with Bremen (+6.8%), Hamburg (2.1%) and Thuringia (2.0%) in the lead. All German federal states scored an increase in 2021. The percentage growth of Mecklenburg-Vorpommern (1.2%), Rhineland-Palatinate (0.7%), Saxony-Anhalt (0.6%), Bavaria (0.3%) and Saarland (0.2%), however, was below the federal average. Excluding Berlin (1.64%), the 2021 average percentage domain growth among the states in the east of Germany (+1.47%) was slightly higher than that of those in the west (+1.42%). As in the last years, the largest number of domains was recorded for North Rhine-Westphalia (3,356,179), which experienced also the highest absolute annual growth (+53,110). The so-called Free State of Saxony with 540,159 registered .de domains achieved the highest density among the federal states in the east of the country and maintained place ten again in the overall German ranking. The smallest number of .de domains - even though it scored the highest percentage growth on an annual basis - continued to be reported for the city state of Bremen (128,253).

You find comprehensive data and graphic material as well as the complete regional analysis in form of an Excel file for all the 401 cities and districts in the statistics section of the DENIC web-site at https://www.denic.de/en/know-how/statistics/. Here, we also make available all the annual analyses since 1995. In addition to absolute values, the statistics provide data on the number of domains related to the number of inhabitants, complemented by maps and diagrams showing the absolute and the relative distribution of domestic domains as well as of domain holders residing outside of Germany.