2016 is a twin-jubilee year for DENIC, the registry operator of Germany’s domain extension .de: Since 5 November 1986 – thus for 30 years – the country code TLD .de has been online. On 17 December, the organisation behind .de – the DENIC Cooperative – celebrates its 20th anniversary and makes the twin jubilee complete.

The history of domain administration in Germany – and thus the history of DENIC, which stands for Deutsches (German) Network Information Center – is a success story. Organised as a cooperative, DENIC today comprises more than 320 companies from the German and the international Internet industry. Within 20 years, more than 16 million domains were registered under .de. This makes DENIC one of the top 3 TLD operators in the world.

Two geographically distant data centers in Frankfurt am Main, Germany, and Amsterdam, Netherlands, and multiple redundant name servers at the most important Internet exchanges in the world, all designed for automatic administration using virtualization technologies, ensure that .de domains can be reached around the clock from any place in the world within a fraction of a second. All this adds up to a reliable and secure infrastructure characterised by high-level performance and availability that is constantly enhanced and improved in accordance with the latest standards.

The structure of DENIC as an independent cooperative operating as a private-sector not-for-profit organisation is in line with the democratic idea of the Internet that aims to serve the interests of all stakeholders. So, the globally unique business model of self-regulatory TLD management provided by a cooperative has long proven successful in Germany. 20 years of expertise, reliability and integrity have gained DENIC great respect both nationally and internationally as one of the leading TLD operators worldwide, all along with much trust of political stakeholders and institutions, in Germany.

Web Offers Under .de? No Connection Without DENIC!

Offering the name service for .de, DENIC operates a basic resource that is mandatory to allow the easy use of the German Internet, by linking domains to the content of websites or to other Internet-based services, like e-mail. Next to managing the electronic register of all .de domains, DENIC performs this key task for the use and benefit of the whole German Internet Community – in a neutral and independent, competent, responsible, non-discriminating way, acting in accordance with the internationally recognized standards for the operation of TLD registries (RFC 1591).

The requirements to be met with regard to security on the Internet are ever increasing. As a result, expectations of the wider public regarding the reliability of technical infrastructure providers like DENIC are growing constantly. DENIC is meeting this challenge by a systematic holistic approach: Consistently using the latest IT infrastructure architectures and applying intelligent cryptographic techniques and authentication methods as well as a risk management system that is in compliance with the relevant standards, DENIC continuously improves the security level of all its services – and this is confirmed through the successful certification of DENIC's Information Security and Business Continuity Management Systems in accordance with the internationally acknowledged standards ISO/IEC 27001:2013 ISMS and ISO 22301:2012 BCM.

During its 20 years of existence, the registry of .de has developed continuously – by increasing its membership by the factor ten, by constantly getting more international, and last but not least by also becoming a political player. From the very start until today, DENIC's success is largely based on the Cooperative's strong rooting in the German Internet community. The by now more than 320 member companies from the digital economy represent a broad cross-section of the diverging interests of all Internet user groups, from the large-scale provider of standardised end-customer solutions to the specialist offering customised package solutions with elaborated security features. Nearly two thirds have been DENIC members for more than ten years.

That the country code .de is of great relevance not only to individuals, enterprises and institutions resident in Germany but far beyond the German borders, was recognised by specialist providers outside Germany as early as 2003, when multinational companies started to register other domain extensions as a complement to their local domains. Today, the 54 European and 20 international DENIC members account for roughly one quarter of the Cooperative's membership. Administering more than 650,000 of all .de domains, they literally make the concept of the Internet as a global village tangible. 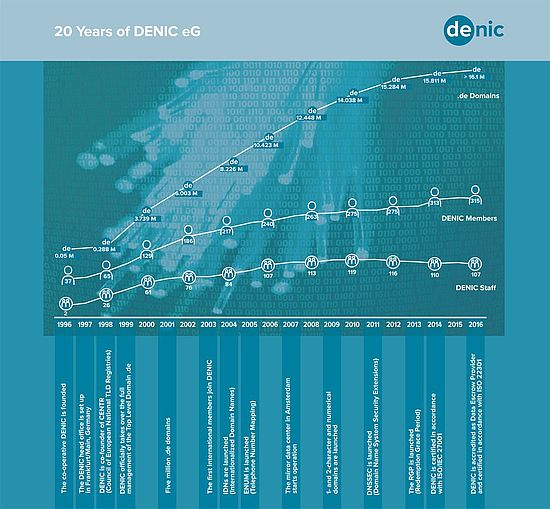 Coming of Age Long Ago

Emerging from the 36 academic and commercial members forming the interest group "Interessenverband Deutsches (German) Network Information Center (IV-DENIC)", which had initially been set up by three German pioneer ISPs in 1993, the DENIC Cooperative founded on 17 December 1996 was joined by another ten Internet service providers until the end of that year. During the previous ten years, the management and DNS service for .de were provided by academia, at the start even from the USA. Only in 1988, a German institution, the University of Dortmund, took over the management of the then first six .de domains (dbp.de, rmi.de, telenet.de, uka.de, uni-dortmund.de and uni-paderborn.de) from the US-based science computer network CSNET. In 1994, this task was transferred to the data center of Karlsruhe University. In the meantime, domains under management (DUM) had leaped to roughly 1,000. Karlsruhe University remained responsible for all aspects of the technical administration of .de until 1998. Only then, all services of the Top Level Domain were bundled in Frankfurt am Main, where the DENIC Cooperative had started its business as a neutral service provider at the beginning of 1997. At that time, domains under management had reached medium five-digit dimensions. Still today, DENIC is based in Frankfurt, where some 100 staff are dealing with all dedicated registry operation issues.

Complementary Service Offers: A Plus of Security for the Domain Industry and the Internet User

Thanks to its robust infrastructure and the comparably liberal registration conditions in Germany, .de soon gained the leading position among the country code Top Level Domains (ccTLDs) and continually strengthened this position until the end of 2015, when .cn (China) became the largest country-targeted TLD because Chinese investors had started to use domain names for speculation purposes on a growing scale.

In response to the changing market environment as of the 2010s, when domain growth slowly began to level off, DENIC soon started to extend its expertise beyond the management of the .de zone to complementary fields of action that benefit also other players in the domain industry: At present DENIC runs managed DNS services for nine country code registries with over 6M combined DUM. Thus, they take advantage of the worldwide availability and high computing performance of DENIC's name servers and achieve a broader, more resilient footprint for their own business.

Since autumn this year, DENIC also offers a new service to assist registrars and registries in complying with European data protection regulations to securely store copies of the domain data administered by them with an independent third party in order to ensure that management of the related domains can be continued even in case of a disruption. Eight customers are already using DENIC's new Data Escrow Service on a test basis.

Initially an institution with a mere technical focus, the Cooperative has long also become a respected voice in ICT and Internet policy related discussions. In permanent contact with other national and international institutions, organisations and associations of the Internet ecosystem, DENIC advocates and promotes the preservation of the open, free and secure Internet, by being actively involved in the central coordination body for Internet infrastructure ICANN, the body responsible for the development of technical Internet standards IETF, the open forum of European operators of IP networks and network infrastructure RIPE NCC, the German national CERT Association of Computer Emergency Response Teams, in the regionals assocations of national Top Level Domain Registries CENTR, APTLD and LACTLD as well as in global and regional forums that deal with the multiple facets of Internet Governance (such as IGF, IGF-D, EuroDIG, NETmundial).

DENIC's mission to act in line with the democratic idea of the Internet, is also reflected in its involvement in the European Summer School on Internet Governance (EURO-SSIG), which is held by experts from universities and companies of the Internet industry. For 10 years, DENIC has invested as the academy's main sponsor in excellent training for the leaders of tomorrow. Until today, roughly 300 alumni from more than 80 countries have been prepared by this programme for the political, legal, economic, socio-cultural and technological future challenges of global Internet governance.

WWW as an Economic Factor

According to the 2016 Digital Economy Monitoring Report published by the German Federal Ministry for Economic Affairs and Energy in October this year, the domestic Internet sector as a key industry by now generates an annual 111 billion Euros, equivalent to about 3.7 percent of the German gross domestic product. It has thus become – not only due to another 9 percent growth rate in 2015 – a more important economic factor than the energy industry or agriculture.

Consequently, the work performed by DENIC every day is constantly gaining in importance: not only for this essential technology and key business sector, but also for the economy, the working world and the society as a whole going digital – a vital factor for tomorrow’s competitiveness and innovative strength not only in Germany.